This is the website for SASI, the Student Association of the School of Information at the University of Texas at Austin. We built this website to serve as a resource where current and prospective iSchool students can learn about who we are, what we do, and how to make the most of your time at the iSchool. 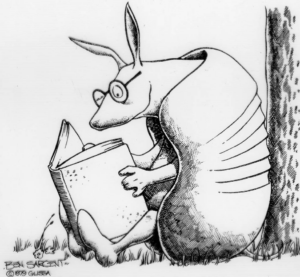 Our iSchool armadillo mascot was created in 1979 by Ben Sargent, a UT graduate who went on to become a Pulitzer prize winning editorial cartoonist for the Austin American Statesman. It was originally commissioned by the previous incarnation of the official iSchool student organization, then called GLISSA (Graduate School of Library and Information Science Student Association). In 2010, the SASI co-directors rediscovered the mascot from within old GLISSA files, and they proudly reinstated it for everyone’s appreciation.